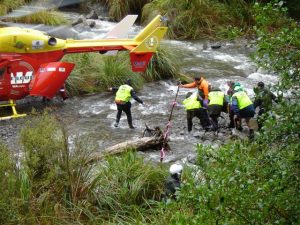 BRITISH backpacker Jamie Neale has been found alive in the Australian bush after his desperate father gave up hope of ever seeing him again.

Mr Neale, 19, from Muswell Hill, north London, had not been seen since July 3 when he left his hostel in the town of Katoomba, New South Wales, for a walk in the Blue Mountains.

Mr Neale’s father, Richard Cass, who flew to Australia to join the search, was preparing to leave Sydney on a flight today after holding a “little closure ceremony” and lighting a candle in the park to say goodbye.

Mr Cass, who was reunited with his son today, said he was “gaunt and scrawny” and had been losing hope he would ever be rescued as search helicopters failed to spot him waving at them.

Mr Cass, who was flown to the hospital to be reunited with his son, told Sky News: “He said he was losing faith in the idea there was a God every time the helicopter flew over and he was waving and shouting and nothing happened.

“He thought he was going to die.”

His son looked “gaunt and scrawny” after surviving on seeds and reeds and sleeping under a log or huddled up in his jacket, he said.

“He’s still a bit depressed, a bit dazed about what happened to him.”

Mr Cass said he thought his son had “probably fallen off a cliff” and added that he must be “the only teenager in the world” to go on an expedition like that without his mobile phone.

Mr Neale’s mother, Jean Neale, said she had refused to believe she would never see her son again.

Speaking from her home in Muswell Hill, she told Sky News: “I never gave up hoping, I always knew he’d be coming home. He’s determined and if he sets his mind to something, he will do it.

“I told all the family and his friends that he was coming home and I had no doubts about that. That kept them strong and in turn that kept me strong.”

Her son was tearful and exhausted when she talked to him on the phone, she said.

“I spoke to him in hospital and he said he didn’t think he’d ever see me again and he just wanted to hear my voice. He was nearly in tears.

She said that as far as she knew, her son’s disappearance had been simply due to him getting lost.

New South Wales Police said in a statement: “About 11.30am today, two bushwalkers alerted emergency services to advise they had come across a man who identified himself as Jamie Neale near the Narrow Neck fire trail, near Katoomba.

“Police Rescue officers, using a Rural Fire Service vehicle, made their way to the location and confirmed the identity of the man.

“He’s been taken to Katoomba Hospital for treatment of dehydration and exposure.”

A hospital spokeswoman said Mr Neale was in a stable condition at Katoomba’s Hospital.

Television pictures showed him getting out of a police car unaided and walking towards the hospital door.

Mr Neale arrived in Australia on June 22 and checked into a youth hostel in Katoomba on Thursday July 2.

A check of his room at the hostel revealed he had not taken any of his belongings with him including his mobile phone and personal papers.

He booked and paid for a tour of some nearby caves for the Saturday but never turned up.

A check of his bank and email accounts confirmed they had not been touched since his disappearance.

“I’m just so pleased to see him.

He said his son, who he described as “a tough kid”, had spoken of eating seeds and plants which tasted like the salad leaf rocket while he was missing.

Mr Neale told his father he had walked up to high ground to get his bearings but lost his way as soon as he walked back into the trees.

I thought I would die, admits British teenager lost in Australian bush

A BRITISH teenager lost in the Australian bush for almost a fortnight said last night: “I really thought I was going to die.”

After an emotional reunion at his bedside, his stepfather said: “He’s the only teenager in the world who goes on a 10-mile hike and leaves his mobile phone behind.”

Jamie vanished on a walkabout in the Blue Mountains of New South Wales.

He survived on nothing but seeds, leaves and lettuce-like plants and last night was being treated for exhaustion and dehydration.

Speaking from his hospital bed, he said: “I was scared they’d stop looking for me. I could see the helicopters flying overhead but they couldn’t see me.”

Jamie’s stepdad Richard Cass flew out to Oz to join the massive search operation. But after a week, with temperatures dropping to around freezing each night and the mountains shrouded in mist and fog, he accepted that his son was gone and made a shrine for him on the mountain.

Richard said: “When I arrived, I thought there was still hope, but after day after day went (I thought) we have to maybe consider something terrible has happened to him.

“I thought if they haven’t found him… he’s fallen off a cliff. He’s probably dead within 24 hours of us knowing that he was missing. I had my little closure ceremony out there in the park.

“I carved his name and lit a candle, buried a red rose for England and he’s come back from the dead. He’s going to come back and see his gravestone.”

With a heavy heart, Richard headed for Sydney airport to fly back home. But as he waited for the plane, he got the news he had been waiting for in a text message from police.

He said yesterday: “It said ‘Phone me, I’ve got good news.

“That was when I knew he was safe. “It was absolutely stunning. I’m at the airport. I’m surrounded by strangers. My brother was there and I’m like a lunatic – ‘My boy’s been found, my boy’s been found!'”

Mum Jean Neale, from Muswell Hill, north London, insisted: “I never gave up hope. You never give up hope on your children until someone actually proves to you differently. As far as I was concerned, he was coming home.

“He’s very stubborn and resourceful.” Jamie set off for Australia on June 20 and had also planned to visit Laos, Vietnam and Nepal before starting at Exeter University in September.

He was captured on CCTV leaving his hostel in Katoomba, New South Wales, on July 3 and reported missing when he failed to turn up for a pre-booked tour of some nearby caves the following day.

But the sub-zero temperatures were so harsh that the police search chopper was grounded several times.

New South Wales assistant commissioner Denis Clifford said it was “like searching for a needle in a haystack”.

One of the rescue team broke an arm and another suffered dehydration and had to be winched out.

As Jamie stumbled around trying to find his way out, sipping rainwater from leaves, he could hear the sounds of a rescue helicopter in the distance.

But his desperate calls for help went unheard. He told his dad he had walked up to high ground to get his bearings but lost his way back in the trees.

Richard said: “He said he was losing faith in the idea there was a God every time the helicopter flew over and he was waving and shouting and nothing happened. He thought he was going to die.”

But by sheer chance, two Aussie bushwalkers stumbled upon the teenager yesterday.

One had medical experience and treated Jamie on a mountain track before he was taken to hospital and treated for dehydration and exposure.

Gaunt and confused, he still managed to crack a joke when he called home.

Mum Jean revealed: “He said to me, ‘At least they found me in time to catch the plane to Kathmandu.’

“I was shocked and asked did he really still want to go travelling, but he said, ‘No, I want to come home.’

Richard added: “I can’t say I’d kill him because it would just spoil the point of him being back.

“I’m going to kick his a**e – the millions that have been spent on this search, the man hours and woman hours that have gone into it… all because he goes out on a walk without his mobile phone.”

Jean said: “One of the first things I asked was if he had run into any poisonous snakes or animals. But luckily, it’s winter over there now and most of the dangerous snakes are hibernating.

“If he goes travelling again, we will get one of those watches with a beacon so he can be picked up if he goes walkabout again.

“He’s not leaving the country again until he has got one of those.”

The Blue Mountains, about two hours inland from Sydney, are a hugely popular tourist destination.

The land is prone to bush fires in summer but temperatures can fall to below zero at night around this time of year, Australia’s winter.

Three million visitors flock to the area every year to see koalas, wombats, huge lizards and kangaroos in their native environment.

But the Blue Mountains are also home to deadlier species, such as venomous spiders and insects. Trekkers are advised to travel with a bush expert.

MUSWELL Hill backpacker Jamie Neale has been found alive after being lost in the Australian bush for almost two weeks.

The former Alexandra Park School pupil arrived in Australia for a holiday but went missing on July 3, after going for a mountain hike.

Two bushwalkers found Jamie, 19, on a nature trail. He has since been taken to Katoomba Hospital for treatment for dehydration and exposure after twelve days without proper food or water.

His father Richard Cass, who flew to Australia last Friday to help search for his son, had been preparing to return later today.

But he is now on his way to the hospital to be reunited with his son.

New South Wales Police said they were “relieved” Jamie had been found after comparing the manhunt as “trying to find a needle in a haystack.”

Jamie had checked into a youth hostel, in Katoomba, Sydney, on Thursday, July 2, and was last seen at 9.40am the following day.

His personal belongings, including a mobile phone and personal papers, were found in his room at the hostel.

Family said Jamie was an experienced hiker who loved the outdoors.

Jamie, who completed his A-levels last year, had been working as a maths and science technician at his former school to save up money for his trip.

On his return, he was heading to Exeter University in September.